The ninth in a series of NSDI workshops "Introduction to NSDI" was held on 29.09.2016 in the State Geodetic Administration. The aim of the workshop was to assist new subjects in understanding the first steps in joining NSDI as well as existing ones in an attempt to clarify possible ambiguities. 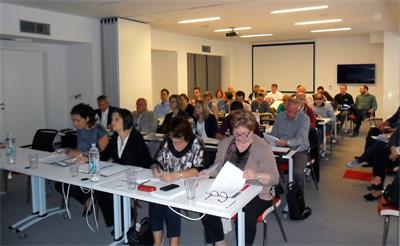 The workshop was held by employees of the National Contact Point: Tomislav Ciceli, Petra Sajko Hlušička, Iva Gašparović, Tanja Rodin and Zvonko Štefan, who have theoretically and practically presented the application process for subjects and their sources of spatial data in the NSDI Registers as well as in the metadata catalogue. They’ve also shown an example of good practice in NSDI in the form of the Gazetteer of Geographical Names. The workshop was attended by 35 representatives of the NSDI subjects and a total of 22 institutions, the structure of which you can see on the graph below. 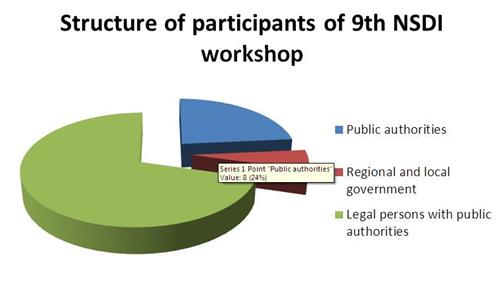 In the introductory lecture, participants were acquainted with the meaning and importance of national spatial data infrastructure, the legal framework of the NSDI and the obligations that derive from it.

In the presentations that followed was explained the registration process for NSDI subjects, the process that subjects undergo when applying spatial data resources in the NSDI as well as the process of filling the Register of NSDI subjects, the Register of spatial data sources and metadata catalogue. Also, the application NSDI Registers, which will keep all enrolled subjects, as well as their sources of spatial data, and will soon be publicly available for browsing and searching on the web page registri.nipp.hr, was introduced. The workshop was continued with practical work, filling in the metadata catalogue for a single source of spatial data.

The last presentation was about the Gazetteer of Geographical Names as an example of good practice in the NSDI.  For the Gazetteer of Geographical Names are developed view and downloads services and is the only source of spatial data in NSDI, which is compliant with INSPIRE specifications.
It is particularly emphasized that the Law on NSDI does not oblige operators to collect new data and submit their spatial data to NCP nor their ceding to the public free of charge. NSDI obliges operators to describe their sources of spatial data with publicly available metadata, and to develop the appropriate network services which should also be described trough metadata.

The workshop was closed by inviting all those present to attend the SDI Days that will be held on 25.11.2016 and will be organized by National Contact Point and the Faculty of Geodesy.
National Contact Point is as always available for any questions that may have remained unanswered, the mail address infonipp@dgu.hr.