Metadata have been used for a long time, since people started making lists of things, inventories, events and other objects or phenomena for the purpose of their systematic records and getting an overview of them. When using spatial data, such as maps in raster or vector format in a GIS environment, spatial databases, or when downloading data through a web-service, we often don't know or are not sure who collected the data and when they did it, what the quality of the data is, what coordinate reference system the data are in, what version the data format is or other information on data that allow being used and interpreted. Such data and their application have a lower value. To avoid these problems, metadata are collected.

Metadata are an integral part of data and together they make single units. Today, the most general definition of metadata is that they are data about data. Metadata need to be documented during the collection of data and they need to be updated when data are changed. In other words, important actions related to data have to be documented through metadata.

Metadata thus became a general term referring to anything of interest. However, describing different types of resources requires different types of metadata and different metadata thematic norms. Inventarisation of everything (knowledge), made possible by metadata, is supported by computers and the amount of information computer systems can store and process, while the development of IT technologies made data sharing an everyday necessity. To be able to use shared data, different groups of users need to know the format of data, their coordinate reference system and other information that can be obtained through metadata catalogues.

There is a clear trend of developing systematic metadata cataloguing (e.g. INSPIRE and national metadata catalogues). To connect different metadata systems, there needs to be some structural link between metadata. INSPIRE was created under a strong influence of ISO metadata standardization, while Croatian NSDI metadata, except national needs, meet the INSPIRE requirements, as well.

In order for spatial data to be included in the NSDI system, they must have metadata. NSDI metadata enables: identification of spatial data sources, their categorization, determination of it position in space, estimation of its time frame, quality, access and use, whom to contact for access to data and other information. NSDI metadata is elaborated in NSDI Metadata Specification v.3.0. Each NSDI metadata has an element that compares the NSDI metadata with ISO and INSPIRE metadata, which enables the sharing and interoperability of the metadata.

Besides the basic role of metadata to describe data, those in the system of INfrastructure for SPatial Information (INSPIRE) or National Spatial Data Infrastructure (NSDI) also meet a certain functionality, i.e. business model.

This definition sets the goals for the business model that metadata must achieve (i.e. describe spatial data and find and use spatial data).

Metadata packages and relations between entities

Metadata for geographic data are represented by means of UML packages. Each package contains one or more entities (UML classes) that can be specified or generalised. Entities contain elements (UML class attributes) that identify discrete metadata elements. Entities can be aggregated and repeated as needed. The figure shows the general overview of a package. Metadata are specified by a UML model diagram and data dictionary for each package 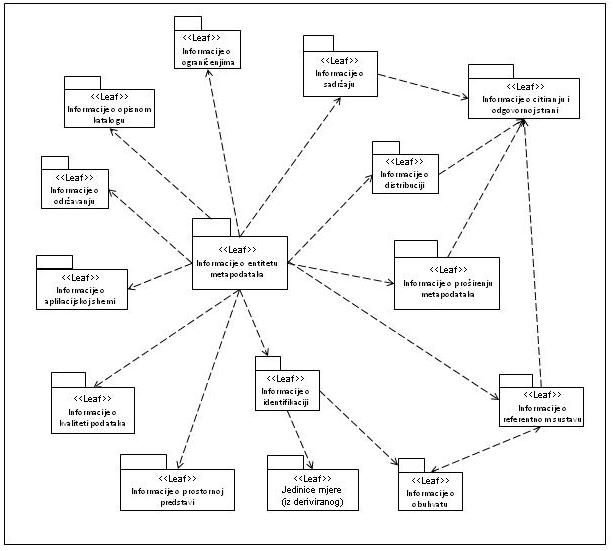 Two-letter abbreviations are used to denote the package that contains a class. Those abbreviations precede class names, connected by a "_".

The UML class diagram in the image defines the geographic information classes that the metadata refers to. 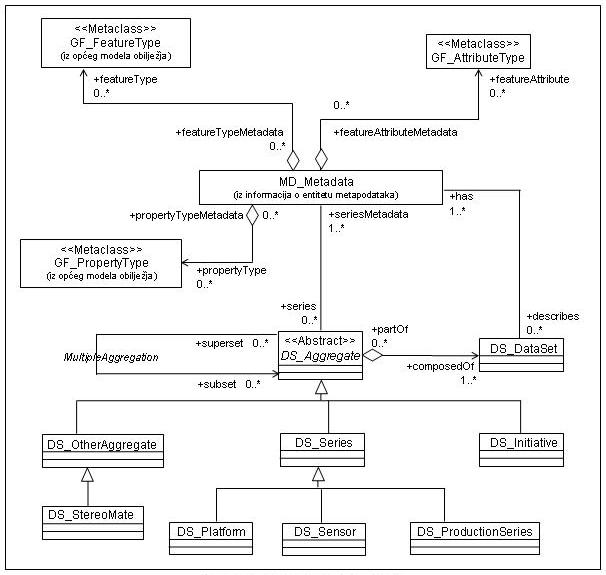