On February 13, 2018, members of the Croatian Parliament discussed the Proposal of the Act on Amendments to the National Spatial Data Infrastructure Act, which was adopted by the Croatian Government at 77th session held on 24 January 2018.
Proposal of the Act, created by State Geodetic Administration, fully harmonizes the National Spatial Data Infrastructure Act to the Directive of the European Parliament and of the Council of 14 March 2007 establishing an Infrastructure for Spatial Information in the European Community (INSPIRE). 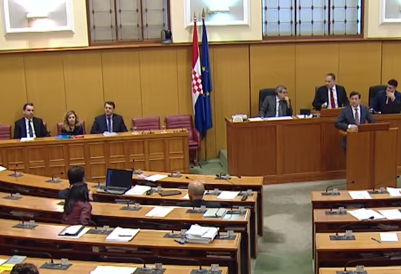 State Secretary Željko Uhlir has presented to the members of the Croatian Parliament the Proposal of the Act on Amendments to the National Spatial Data Infrastructure Act and he stated that the proposed Act describes spatial data themes (Annex I, II and III), more precisely defines NSDI Registry and its content and further elaborates the access limitations of the spatial data through network services.
In the 50-minute parliamentary debate, the members of Parliament welcomed the adoption of the proposed act and emphasized that it would make the issue of using spatial data at public administration level more transparent and more efficient. During the discussion, the importance of gathering spatial data information and making them easier to find, use and access was emphasized. Also, it was emphasized the need to involve all institutions as well as regional and local self-government units in the implementation of the National Spatial Data Infrastructure and the importance of spatial data harmonization to achieve their interoperability.
The proposal of the law in the first reading was unanimously adopted.